Chipotle – A dream and a transmedia storytelling strategy to change the fast food industry!

The theme of healthy eating is in the order of the day, a kind of self-awareness that makes us increasingly worry about the type of food we eat, even if only for appearance reasons.

However, if this is the case, we have all noticed that the brands have not missed the opportunity to include in their strategies this theme of awareness, often creating products that allow more health and well-being, or just by  taking advantage of marketing strategies for greater exposure or certain positioning.

Regarding this subject, I have followed some brands of which I highlight one, since in my opinion, there has been a constant concern about the process of industrialization in food. I speak of Chipotle Mexican Grill.

For those who do not know the brand, here is a brief framework of their story and marketing strategy, since both relate in full complicity – one without the other would be nothing.

The creator of the project, Steve Ells, a young art historian graduate in the 1990s  and with an enormous passion for cooking, decided to focus on a culinary training, which allowed him an internship in one of San Francisco’s most famous restaurants , the Stars.

As always, the life of a trainee is not easy, and so it was for Steve, who was often obliged to eat in small food stands, where clients were essentially Mexican immigrants.

Always attentive, Steve who at that time aspired to be chef of a restaurant with Michelin star, radically changed his ideas concerning cooking, creating the brand and business Chipotle, a Mexican food restaurant network that has become one of the largest catering cases today in the USA.

Set on a paradigm shift towards fast food, from the beginning the brand chose to produce its meals based on fresh, freshly prepared and affordable food. In addition, the brand also bets on a local supplier base and meat produced under controlled conditions, such as the absence of antibiotics and hormones, and even banned all genetically engineered ingredients from its products.

This strategy is centered on a growing public, who is looking for food based on fresh food (freshly prepared and fresh food) at affordable prices. The brand positioning and the entire marketing strategy worked to convey the same, it is based on the communication of its mission which is “serving food with integrity”. 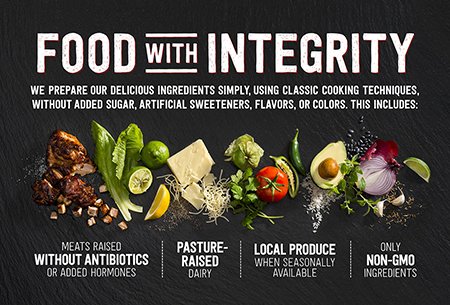 In order to implement its marketing strategy, Chipotle, in contrast to the great global fast food chains that essentially bet on mass communication through TV and other means of mass market, developed a concept centered on storytelling and transmedia essentially widespread through actions created for online digital media.

“Back To The Start” is the title given to the short film and music released on Itunes, which tags the brand’s positioning campaign in digital media.

A film that portrays the story of a farmer who grows a business to the point of becoming an industry in which all kinds of excesses are committed for profits and results, often forgetting the healthiest and most sustainable practices in the process.

The main aim of the film is to shed the motto for the brand message that emphasizes his speech on the importance of developing a healthy eating system.

The theme, which also became the brand’s signature – Cultivate a Better World, – led to the launch of an application that translates to a game for IOS platforms, portraying the story of a scarecrow that” helps caged animals, protects and transports fresh vegetables for the city. ”

To release the game the brand has developed an extraordinary video that tells a story, exemplifying a good storytelling strategy using transmedia.

The animation turns to the scarecrow again as the main character, who in this case observes animals being manipulated for use in food industry. The brand often uses this character, symbol of an agricultural system of small production, seeking to promote through the use of narrative / storytelling, and trigger an alert message for the need to consume natural foods. A kind of “Ipiranga cry” that alerts all and sundry.

Through the use of multiplatforms to reach different audiences, Chipotle manages to convey a message in “fiction mode”, promoting a value-added communication. One such example is the created game that focuses on a younger audience.

In my opinion, this brand can thus make society reflect on one of the greatest dramas in the modern world, promoting a positive and healthy attitude among consumers, regarding its purpose as a brand.

Visit here the brand’s youtube channel so that you can explore a little more the whole universe of actions developed by Chipotle while using the video.
The strategy of transmedia storytelling was essential for this brand to have been positioned in a market with high entry barriers.

This article was originally published on Blog Transmedia Land.